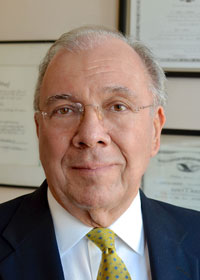 Robert M. Silverson, Jr., a principal in the firm, graduated from Fordham University in June 1964 with a Bachelor of Science Degree in Economics, and thereafter attended Cleveland State University, Cleveland Marshall School of Law and obtained a Juris Doctor Degree, cum laude. He was admitted to the New York State Bar in September 1970, the United States District Courts both Southern and Eastern Districts in October 1971 and the United States Supreme Court in December 1973. From 1992 to 2004, Mr. Silverson served as counsel to the New York State Senate Insurance Committee. Mr. Silverson has also been designated an arbitrator and mediator by the National Arbitration and Mediation Association of New York, was designated as a special arbitrator by the International Court of Arbitration, International Chamber of Commerce in Paris, France in 1993 and is currently a member of the New York State Trial Lawyers Association and the Bronx Bar Association. During the years of 1984 to 1988, Mr. Silverson was an adjunct professor at Lehman College City University of New York.

Prior to joining Fisher, Fallon, Mr. Silverson had been elected a Judge of the Civil Court of the City of New York, and sat as a Trial Judge in Bronx County presiding over jury and non-jury trials in both commercial and insurance cases. Prior to his election to the Civil Court, Mr. Silverson was a partner in the law firm of Stone & Silverson, a commercial and insurance litigation firm in Manhattan. Additionally, Mr. Silverson served as an Assistant District Attorney in Bronx County from 1970 through 1974 and tried over 40 felony and homicide cases to verdict as well as handling over 24 appellate matters in both the Appellate Division and the Court of Appeals.