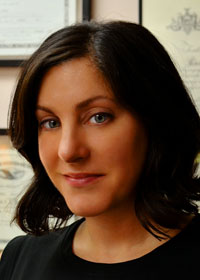 Rachel H. Poritz, a partner at the firm, specializes in medical malpractice defense, with an emphasis on legal writing, including summary judgment motions, appeals and post-trial motions. She is the leader of the firm's appellate practice.

During law school, Ms. Poritz drafted motions and appeal documents in the mass tort bankruptcy case entitled In re Dow Corning and attended the Dow Corning Breast Implant Settlement Hearings in the Bankruptcy Court of the Eastern District of Michigan.

Following graduation, Ms. Poritz acted as the Court Attorney to former Supreme Court Justice Lorraine S. Miller in the Supreme Court of the State of New York, New York County. In that position, Ms. Poritz managed a civil litigation case inventory and negotiated settlements in medical malpractice, tort, and labor law cases. Prior to joining our firm over 10 years ago, Ms. Poritz drafted motion papers and conducted medical research in the first successful Frye hearing to preclude an expert witness in a medical malpractice case in Richmond County.

Ms. Poritz is admitted to practice before the various New York State Courts. She is admitted to Federal Practice before the Second Circuit Court of Appeals and the U.S. District Courts for the Eastern and Southern Districts. Additionally, she has successfully and victoriously litigated a complex insurance defense case from the state court to the New York Court of Appeals on behalf of a physician whose excess insurer refused to satisfy the balance of a judgment entered against him.